Extinction is, sometimes, merely a life stage. The resurrection of extinct species is not only possible with modern science, but it is also helpful to study evolutionary changes that occur because of natural events or anthropogenic stressors. As long as their dormant propagules are preserved in permafrost, soils or sediments, species can be brought back to life—sometimes. Resurrection ecology allows researchers to identify various stages of evolution by comparing extinct, resurrected species with their living descendants. 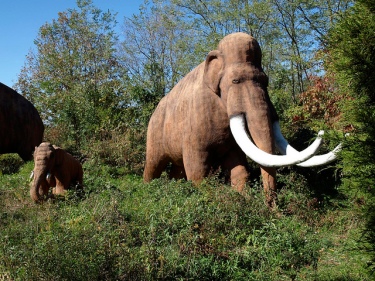 Successful resurrections are relatively recent. They were first achieved 10 years ago with Daphnia, minute, shrimp-like crustaceans also known as water fleas. Now, 10 years later, the concept of resurrection has been extended from the minute to the huge and everything in between. Recent protagonists include a giant virus that infects amoebas—brought back to life after 30,000 years spent frozen in Siberian ice—and moss that was frozen in Antarctic ice for over 1,500 years. There are also would-be protagonists, with the woolly mammoth being the most inspiring candidate. Brian Switek lists “other Lazarus-wannabes, including the Tasmanian tiger, passenger pigeon, Steller’s sea cow, and the Xerces blue butterfly.”

But let’s go back to Daphnia. Lakes, ponds, streams and rivers are full of them. In the fall, they produce the so-called winter eggs, which are enclosed in a thick shell. Some end up in the sediment, unhatched. In 2004, researchers figured out how to resurrect eggs that had been buried in the sediment of Lake Superior for decades, thus identifying a repository of long-term genetic and ecological information and reviving the concept of resurrection ecology. During a recent study, scientists hatched 700-year-old eggs from South Center Lake in Minnesota and used the resurrected Daphnia to understand how the ancient crustaceans utilized phosphorus in comparison to their modern-age counterparts.  Phosphorus concentrations in the lake increased dramatically in the late 1800s, due to its use as a fertilizer by nearby farms. This study exemplifies how resurrection ecology can be applied to understand evolutionary changes caused by anthropogenic activity. 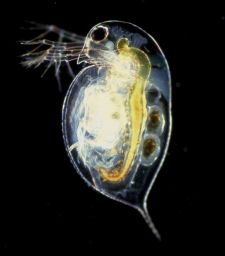 The 700-year-old resurrected Daphnia are young, though, when compared to living organisms brought back to life from the Ice Age – a whole, fertile plant regenerated from 30,000-year-old fruit tissue buried in Siberian permafrost and the giant virus that infects amoebas. According to the researchers that achieved the plant regeneration feat, plant tissues naturally preserved over thousands of years demonstrate that permafrost is a “depository” of an ancient gene pool and is an important resource for evolutionary studies. Not all is good, though. The scientists that discovered the giant virus point out that “The revival of such an ancestral amoeba-infecting virus…suggests that the thawing of permafrost either from global warming or industrial exploitation of circumpolar regions might not be exempt from future threats to human or animal health.”

Yet there is more coming out of the ice. Just yesterday (March 17, 2014), a study published in Current Biology revealed the resurrection of ancient moss from Signy Island off Antarctica. A team of scientists sliced frozen moss cores and placed them in an incubator at a normal growth temperature and light level. Surprisingly, the moss started to grow after only a few weeks.

There is a lot to think about—resurrections of all types go hand-in-hand with countless ethical issues and are up for hot debate as their applications to ecology and conservation inexorably move forward.  Are we reviving micro-organisms that can cause harm to humans or wildlife? Are we resurrecting potential crop pests? Why bring back the woolly mammoth while its closest relative, the African elephant, is threatened by poaching? Should we revive species that may not be supported by existing habitats? The list goes on and on. For a thorough discussion of these issues, head to TedxDeExtinction, which in 2013 provided “an ideal platform to examine de-extinction through the ideas of its key players—conservationists, genetic technology practitioners, scientists involved with current species-revival projects, ethicists—and an exciting opportunity to explore the possibilities and boundaries of science.”

Maybe “caution” is the word to use when planning resurrections. As Nathaniel Rich wrote a few weeks ago, “Bringing extinct animals back to life is really happening—and it’s going to be very, very cool. Unless it ends up being very, very bad.”

2 thoughts on “Resurrection Ecology: Extinct Species and the Changing Environment”