The influence of climate change on the spread of infectious diseases is a topic that generates intense debate, mostly because these effects depend on a variety of intertwined, variable factors – wealth of nations, healthcare infrastructure, availability of vaccines and drugs as well as ability to control vectors such as mosquitoes, ticks, snails, and others. Vector control is, indeed, one of the most important measures included in the existing global strategy to fight infectious diseases.

Mosquitoes transmit – among other infectious pathogens – the West Nile virus, which was first detected in New York City in 1999. It spread rapidly throughout the continental United States. Outbreaks of West Nile virus fever and encephalitis now occur across the nation each summer, when mosquitoes are most numerous and active. The virus moves from birds to mosquitoes and from mosquitoes to birds. Infected female mosquitoes spread the virus to a variety of hosts – including humans – when taking a blood meal. Thus, the best way to prevent West Nile virus infection is to control mosquito populations through integrated pest management programs that incorporate vigilant surveillance, habitat reduction, pesticides, and public education.

The use of pesticides to prevent disease outbreaks in humans is often necessary to reduce the number of biting female mosquitoes, especially during the summer months. These pesticides are sprayed from hand-held application devices, trucks, or aircraft to surface water where mosquitoes breed, which raises concerns about their potential toxicity to aquatic organisms immediately after spraying events, and brings up the need to balance risks to environmental and human health.

How can we determine whether or not these concerns are justified? Results from a new study published in Integrated Environmental Assessment and Management (March 21, 2014) help to answer this question. During the summers of 2011 and 2012, Bryn Phillips, at the University of California, Davis, and his collaborators monitored water column and sediment samples in California to determine the environmental effects of pesticide applications. 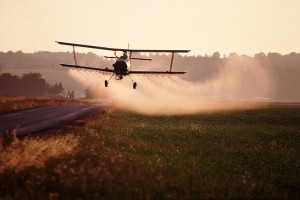 The goal of the study, “Monitoring the aquatic toxicity of mosquito vector control spray pesticides to freshwater receiving waters,” was to determine whether or not toxicity testing could contribute important information for evaluating the impact of pesticides on aquatic systems, as compared to the analysis of the active ingredient alone.

Phillips and collaborators performed a combination of aquatic toxicity tests and chemical analyses on pre- and post-application samples from agricultural, urban, and wetland habitats. They monitored a variety of pesticides used for mosquito control: the organophosphate pesticides malathion and naled; the pyrethroid pesticides etofenprox, permethrin and sumithrin; pyrethrins, and piperonyl butoxide. The study results show that about 15% of the water samples collected following application of pesticides were significantly toxic, in many cases because of dichlorvos, a breakdown product of naled. In other cases, toxicity was likely caused by synergism between piperonyl butoxide and pyrethroid pesticides.

These results emphasize the importance of toxicity testing for the detection of effects due to breakdown products and synergism. In their article, the investigators conclude “Toxicity testing can provide useful risk information about unidentified, unmeasured toxicants, or mixtures of toxicants.” Overall, however, the results indicate that many of the spray pesticides examined do not pose a significant toxicity risk to invertebrate animals in aquatic habitats.

Interestingly, the study was prompted by the California State Water Resources Control Board in cooperation with the Mosquito Vector Control Association of California and in the context of the Clean Water Act, following the adoption of a National Pollutant Discharge Elimination System General Permit. However, the final permit decision (summarized on page 2, number 8, of the State Water Resources Control Board Amended Monitoring and Reporting Program) states that: “In lieu of water quality monitoring for these active ingredients, the amended MRP requires reporting of corresponding application rates and incidents of noncompliance.”

In a telephone interview, Phillips said, “While the study was designed to determine the potential environmental effects of spray pesticide applications, it was clear, based on the final permit decision, that the policy makers were trying to strike a balance between human and environmental health.”

We need pesticides to protect human populations from West Nile virus. At the same time, we want to protect human populations and aquatic systems from the damaging effects of pesticides. The balance between these factors is likely to be influenced by climate change, where temperature shifts and altered patterns of precipitation directly affect mosquito populations, even in drought conditions. Warmer temperatures and prolonged periods of drought can actually boost mosquito populations. Indeed, warmer temperatures increase the rate of mosquito development from egg to larva to adult, as well as the rate of viral replication in infected insects. In addition, mosquitoes feed more often in warmer temperatures, thus increasing the spread of the virus. Pools of standing water, so often found in periods of drought, provide breeding grounds, and the lack of rainfall ensures that developing mosquitoes are not washed away.

It has been said that the chance of a West Nile virus outbreak hinges on a fine line between drought and rainfall. We can expect an increased use of pesticides when the right conditions for mosquito spread occur. Hopefully, additional toxicological studies will be carried out to identify the still undetected, environmentally harmful breakdown products and synergistic activities of pesticides – prompting a reassessment of water quality monitoring. This information is necessary to properly guide policy in a constantly changing environmental landscape subjected to temperature increases and varying precipitation patterns.