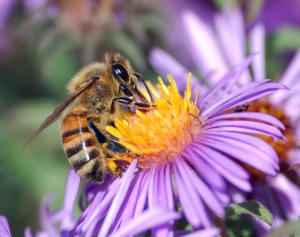 Bees have been declining for years worldwide—this is a well-accepted fact. However, the “why” of this decline is still a matter of debate. Although it is likely that a combination of different factors is contributing to the global bee die-offs, increasing attention is now devoted to the toxic effects of a group of pesticides called neonicotinoids, or neonics for short. They are systemic pesticides—their solubility in water allows them to reach leaves, flowers, roots and stems, even pollen and nectar. One could therefore infer that these pesticides will likely kill not only the insects that farmers want to eliminate, but also pollinators.

Is the inference of the suspected deletorius effects of neonics on bees sufficient to demand regulatory interventions? Certainly not—we need scientific evidence. And, a little at a time, scientific evidence is accumulating. Neonics are chemically similar to nicotine and are potent neurotoxins. Examples include acetamiprid, clothianidin, imidacloprid, nitenpyram, nithiazine, thiacloprid, and thiamethoxam. They can be applied to the foliage, to the soil, or directly to the seeds. Farmers can even buy seeds that are pre-coated with these pesticides. As the pre-coated seeds grow, the pesticides reach all parts of the plant. 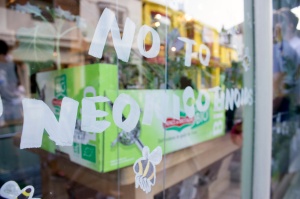 Although such a “ban” is temporary (2 years) and represents a precautionary measure, it generated widespread debate. While it was defined by some as a “victory for bees,” Syngenta Crop Protection and Bayer CropScience, two agrochemical companies that produce the banned pesticides, brought legal cases before the Court of Justice of the European Union. On the other side of the Atlantic, the U.S. Environmental Protection Agency (EPA) stated: “Based on currently available data, the EPA’s scientific conclusions are similar to those expressed in the EFSA report with regard to the potential for acute effects and uncertainty about chronic risk. However, the EFSA report does not address risk management, which, under U.S. federal law, is a key component of the EPA’s pesticide regulatory scheme.” The EPA is currently re-evaluating the neonicotinoid pesticides through registration review, which is the EPA’s periodic re-evaluation of registered pesticides to ensure they meet current health and safety standards.

Meanwhile, a study published just a few days ago (July 9, 2014) in the journal Nature, shows that imidacloprid is linked to the decline of several species of insectivorous birds—these birds are affected after ingesting seeds coated with imidacloprid. In addition, they’re affected because the neonicotinoid eliminates one of their food sources—insects. The authors conclude that “the impact of neonics on the natural environment is even more substantial than has recently been reported and is reminiscent of the effects of persistent insecticides in the past. Future legislation should take into account the potential cascading effects of neonics on ecosystems.” In response, Bayer CropScience issued a statement saying that the study does not provide substantiated evidence for the indirect effects of imidacloprid on insectivorous birds.

Interestingly, “A review of the direct and indirect effects of neonics and fipronil on vertebrate wildlife” (published June 2014) concluded that the systemic insecticides neonics and fipronil (a type of pyrazole pesticide) are capable of exerting direct and indirect effects on terrestrial and aquatic vertebrate wildlife, thus warranting further review of their environmental safety. 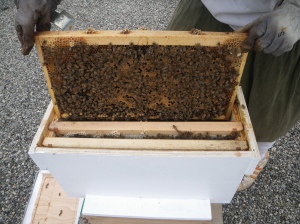 So let’s take a look at the latest evidence of the negative effects of neonics on bees. A study from the Harvard School of Public Health (published on May 9, 2014) shows that clothianidin, by impairing the bees’ neurological functions, significantly harms honeybee colonies over the winter, particularly during colder winters. The findings are similar to previous results from the same research group, which show a link between low doses of imidacloprid and Colony Collapse Disorder, a widespread a disturbing phenomenon where bees abandon their hives over the winter and eventually die. Indeed, another study from scientists at the University of Guelph shows that long-term exposure to imidacloprid affects individual bees’ day-to-day behavior, including pollen collection and the choice of flowers that worker bees visit. The scientists reached these conclusions by comparing colonies treated with imidacloprid to untreated colonies. Nigel Raine, one of the scientists involved in the study, said in a press release: “Bees have to learn many things about their environment, including how to collect pollen from flowers. Exposure to this neonicotinoid pesticide seems to prevent bees from being able to learn these essential skills.”

In one of the first news reports describing Colony Collapse Disorder (2007), the New York Times wrote, “In a mystery worthy of Agatha Christie, bees are flying off in search of pollen and nectar and simply never returning to their colonies. And nobody knows why.”

Are we now getting closer to knowing “why”? Perhaps, if in addition to the previous findings we identify the cellular mechanisms underlying the negative effects of neonics. And here is a mechanism, fresh out of the scientific literature. A new study published in Environmental Toxicology and Chemistry (August 6, 2014) shows that fipronil and imidacloprid inhibit mitochondrial activity in the head and thorax of honeybees. Because mitochondria are the power plants of cells, inhibition of their bioenergetics results in depleted cell energy, contributing to the bees’ inability to forage and return to the hive.

While further studies are necessary to confirm that neonics are responsible, at least in part, for Colony Collapse Disorder and the worldwide decline of bee populations, there are additional signs of hope for the bees. On June 20, 2014, President Obama signed the Presidential Memorandum “Creating a federal strategy to promote the health of honeybees and other pollinators” that not only recognizes the breadth, severity, and persistence of pollinator losses, but the strategy also takes a number of important steps to tackle the problem of pollinator declines, including the establishment of a new Pollinator Health Task Force and a Public Education Plan.

Let’s not forget that slightly more than 100 crop species provide 90 percent of food supplies for 146 countries, according to FAO estimates. Seventy-one of these crop species are bee pollinated. Simply said, we can’t afford to lose the bees.

7 thoughts on “Neonicotinoid Pesticides: New Findings Highlight Their Role in the Disappearance of Bees”