During the past few decades, coral reefs—the rainforests of the sea—have been declining at an alarming rate around the world. The threats faced by these extremely diverse and fragile ecosystems are numerous and difficult to control. In addition to weather-related damage, pollution, ocean acidification, coral mining, disease, overfishing and destructive fishing practices, coral reefs are subjected to the negative effects of global warming—increasing sea surface temperatures lead to coral bleaching, a process that makes corals become bone white and often die. A couple of years ago, David Gruber wrote in the New York Times, “It is difficult being a coral reef scientist in 2012. The system we are studying is dwindling—and we feel there is an urgent need to understand the ecosystem while it still has a pulse. Coral reefs are on target to be one of the first major ecosystems to be pushed to an unproductive state.” 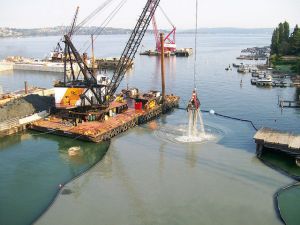 A global report released in 2011 by the World Resources Institute (Reefs at Risk Revisited) rated 75 percent of the world’s coral reefs as threatened and declared that policymakers, government officials, resource managers, and others need to take action to manage risks locally and globally. However, it seems that advice is not easy to hear. Australia’s Great Barrier Reef—a World Heritage Site and the world’s largest coral reef system—appears headed for destruction. At the end of 2013, the Australian government approved the construction of a massive coal port, which will involve dredging 3 million cubic meters of seabed. Dredging, the removal of bottom sediment, is necessary to ensure the safe passage of large vessels. The dredge spoil (dredged sediment) will be dumped into the Great Barrier Reef World Heritage Area. The project developers are still attempting to find a precise site to dump the spoil, as the original approved location was found to be unsuitable. Dredging and dumping of spoil make the surrounding waters muddy, thus limiting the amount of light available to corals and potentially inducing starvation. In addition, dredging results in the release of toxic chemicals deposited in the sediment.

The Great Barrier Reef is not the only coral habitat threatened by dredging. Last June, dredging began in the Port of Miami, Florida, in a channel known as Government Cut. The Army Corps of Engineers removed large corals in preparation for the dredging and transplanted the removed corals onto other reefs. A small group of researchers, headed by Colin Foord, found thousands more coral specimens when sweeping the channel after the Army Corps; the researchers raced to save the remaining coral. Foord told NPR “We’re finding brain coral. We’re finding boulder corals, the mountainous star coral. We’re finding about four or five species of corals that just this past year were proposed to be listed on the endangered species list. And they’re all growing out there.”

More than 90% of Miami’s coral has disappeared. Thus, studying corals that have managed to thrive in the unnatural conditions of a busy shipping channel may prove invaluable to understanding how corals can adapt to changing environments. Andrew Baker, a professor and coral biologist at the University of Miami, told the Miami Herald, “It’s just a shame that now that we’re getting an inkling of what causes corals to survive, we’re destroying them.”

While we wait tirelessly for government officials to help save coral reefs by imposing limits on dredging, are there any other signs that give us hope for recovery? The thriving corals in the Government Cut channel indicate that recovery is possible. As stated in the Key Findings of the 2011 World Resource Institute report, reefs are resilient—they can recover from coral bleaching and other impacts, particularly if other threats are low.

Recently, hopes for coral survival have been further raised by the surprising discovery of reefs that thrive in naturally acidified waters. In addition, a report released at the beginning of this month by the Global Coral Reef Monitoring Network, the International Union for Conservation of Nature, and the United Nations Environment Programme, indicates that Caribbean coral cover has declined by more than 50% since the 1970s. Coral reef health requires an ecological balance of coral and algae, which grazing fish, such as parrotfish, help to maintain. Thus, restoring parrotfish populations and improving other management strategies, such as protection from overfishing and excessive coastal pollution, could help the reefs recover and make them more resilient to future effects of climate change.

In a related press release aptly titled “From despair to repair: dramatic decline of Caribbean corals can be reversed,” Ayana Johnson of the Waitt Institute’s Blue Halo Initiative said “Barbuda is about to ban all catches of parrotfish and grazing sea urchins, and set aside one-third of its coastal waters as marine reserves. This is the kind of aggressive management that needs to be replicated regionally if we are going to increase the resilience of Caribbean reefs.”

However, according to an Associated Press story, Mark Eakin, Coordinator of the National Oceanic and Atmospheric Administration’s Coral Reef Watch program, said that the report understates the impact of ocean warming. “It’s something that I would say they overlook in their studies,” said Eakin.”We really need to deal with climate change.”

Identifying traits associated with coral resilience to climate change may help improve the chances of recovery by aiding in the selection of the most adaptable species for conservation efforts. Results from a new study show that it is possible to identify such traits. Andrea Grottoli, Professor in the School of Earth Sciences at The Ohio State University, said, “If we conserve reefs that contain coral species with these survival traits, then we’re hedging our bets that we might be able to preserve those reefs for an extra decade or two, buying them enough time to acclimatize to climate change.”

However, legislation and regulations need to be developed and implemented both locally and globally, to systematically and timely address the large variety of co-existing threats that undermine the natural resilience of coral reefs.

5 thoughts on “The Global Decline of Coral Reefs: Is There Hope for Recovery?”