Locusts—the oldest migratory pests in the world—are decimating crops and threatening food security in East Africa. Unlike ordinary grasshoppers, these pests gregarize and migrate over long distances. The most devastating of all locust species is the desert locust (Schistocerca gregaria), which is currently swarming at extraordinary levels. According to the latest update (5 March 2020) provided by Locust Watch, “The situation remains extremely alarming in the Horn of Africa, specifically Kenya, Ethiopia and Somalia where widespread breeding is in progress and new swarms are starting to form, representing an unprecedented threat to food security and livelihoods at the beginning of the upcoming cropping season.”

“A Swarm of Locusts” by Emil Schmidt

Desert locust swarms vary in size from about one square kilometers—which can contain 40 to 80 million adult insects—to several hundred square kilometers. They do not attack people or animals, and there is no evidence they carry diseases that can harm humans. However, in one day, locust swarms can consume crops that could provide food for tens of thousands of people. One swarm sighted in northern Kenya was reportedly 2,400 square kilometers, more than twice the size of Paris or New York. Climate change is the likely culprit behind the current desert locust infestations. Warmer seas result in more Indian Ocean cyclones, causing heavy downpours along the Arabian Peninsula and the Horn of Africa. In turn, the heavy downpours create ideal conditions for locust breeding. During quiet periods—dubbed recessions—desert locusts are usually restricted to about 30 countries spanning about 16 million square kilometers in the semi-arid and arid deserts of Africa, the Near East and South-West Asia, from Mali and Niger in West Africa to India and Pakistan in South Asia. However, during the so-called plagues, desert locusts may spread over 29 million square kilometers, encompassing parts of 60 countries—more than 20% of the total land surface of the world. Thus, during plagues, these pests may damage the livelihood of a tenth of the world’s population.

In January 2020, the United Nations (UN) Food and Agriculture Organization warned that Ethiopia, Kenya and Somalia are dealing with desert locust swarms of “unprecedented size and destructive potential,” with the potential to spill over into more countries in East Africa. The agency stressed that as favorable breeding conditions continued, the increase in locust swarms could last until June and, if left unchecked, the numbers of crop-devouring insects could grow 500-fold by then.

Notably, by 25 February top UN relief officials warned in a statement that along with climate shocks, conflict and acute food insecurity, the East Africa region now faces a hunger threat and pointed out that the locust upsurge is “a graphic and shocking reminder” of the region’s vulnerability. The statement read: “This is a scourge of biblical proportions. Yet as ancient as this scourge is, its scale today is unprecedented in modern times.” A week before the statement was released, a swarm crossed into South Sudan, one of Africa’s most food-insecure and fragile countries. Then, another swarm reached the eastern boundaries of the Democratic Republic of the Congo, a country that has not seen a locust incursion since 1944. UN relief officials pointed out that the potential impact of locusts on a country that is still grappling with complex conflict, displacement, and outbreaks of Ebola and measles could be devastating. 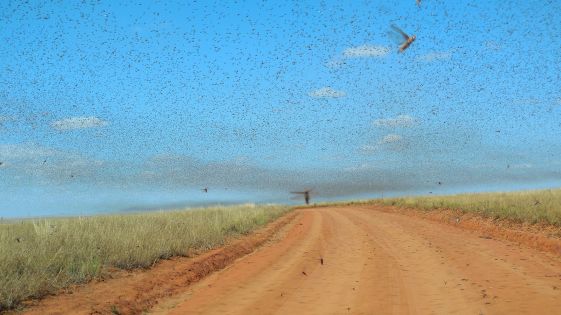 Despite efforts to contain the infestation through mass spraying of chemical pesticides, swarms have also spread to the Persian Gulf region. Thus, Iran is simultaneously afflicted by COVID-19 and desert locusts. In Iran, “The density of locusts in the swarms is so high that a 10 to 15-centimeter layer of dead locusts forms on the ground after spraying pesticides.” In February, Pakistan declared an emergency saying locust numbers were the worst in more than two decades, and China pledged to help by deploying 100,000 ducks. According to the agricultural expert who designed the duck-based control strategy, a single duck can eat more than 200 locusts a day and can be more effective than pesticides.

Meanwhile, the Horn of Africa is expecting an imminent second hatch of the insects as it enters the cropping season. In Kenya, researchers have developed a supercomputer model to predict breeding areas that may have been missed by ground monitoring—areas that could become sources of new swarms if not sprayed. Kenneth Mwangi, a satellite information scientist, told The Guardian: “The model will be able to tell us the areas in which hoppers are emerging. We will also get ground information. These areas can become a source of an upsurge, or a new generation of hoppers. It becomes very difficult and expensive to control, which is why we are looking to prevent an upsurge.” The researchers aim to stop the locusts from becoming adults, as that leads to another cycle of infestation. The UN World Meteorological Organization in New York receives the model output showing where the locusts are expected to spread, and is then able to help planning action on the ground.

Hopefully, the supercomputer model will help to control the second hatch. A 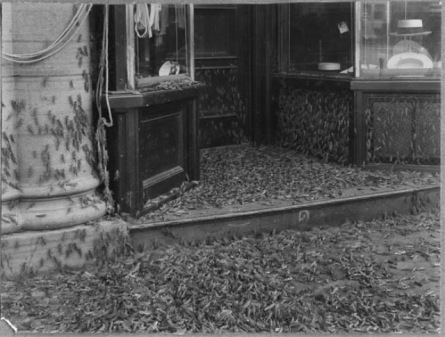 lthough very similar in nature, we cannot hope that the desert locusts will suddenly and mysteriously disappear as it happened to the locust swarms that regularly swept across North America throughout the 19th century, “turning noon into dusk, devasting farm communities, and bringing trains to a halt as the crushed bodies of the insects greased the rails.”