According to the Food and Agriculture Organization of the United Nations (FAO), globally, the fraction of fish stocks that are within biologically sustainable levels has exhibited a decreasing trend, from 90.0 percent in 1974 to 66.9 percent in 2015. Further compounding this, the percentage of stocks fished at biologically unsustainable levels increased from 10 percent in 1974 to 33.1 percent in 2015, with the largest increases in the late 1970s and 1980s, and a slight decline in 1996. However, a study published in 2016 shows that we catch much more fish than estimated by the FAO. Daniel Pauly, lead author of the study, told The Guardian: “Our results differ very strongly from those of the FAO. Our results indicate that the decline is very strong and is not due to countries fishing less. It is due to countries having fished too much and having exhausted one fishery after another.” 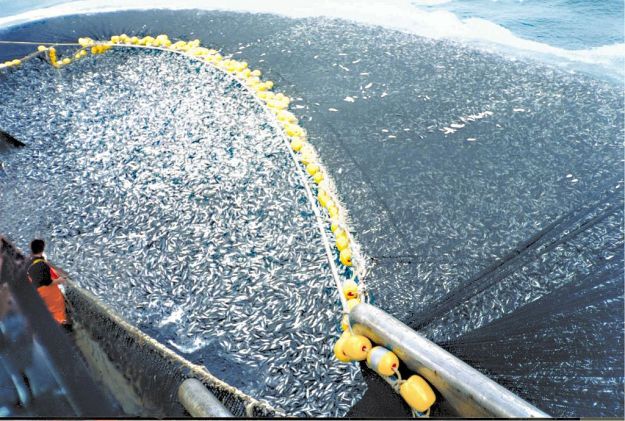 Fish are an essential source of nutrition for billions of people around the world. Thus, fishing is a global industry necessary to provide food security, improve livelihoods, and promote economic growth. But are overexploitation and overfishing the only factors undermining the world’s fisheries? Results from a new study indicate that climate change and resulting ocean warming, which alter habitats for marine fishes and invertebrates, are also contributing to the decline of fish populations.

Climate change and ensuing higher temperatures, extreme weather, droughts, wildfires, increasing levels of carbon dioxide and sea level rise are indeed expected to impact quantity and quality of the agriculture-based global food supply. However, the new study shows that climate change is already crunching the productivity of marine fisheries. Indeed, an overall reduction in yield has been occurring over the past 80 years. Importantly, the new study separates the effects of ocean warming from other factors such as overfishing, and establishes that fisheries around the world have already been impacted by ocean warming, as compared to hypothetical changes expected in the future that can be weighted down by uncertainty.

The study authors used temperature-dependent population models to measure the influence of warming on 124 marine species across 38 ecoregions, representing about one-third of the reported global catch, and developed a new map of “losing” and “winning” ecosystems under ocean warming. The researchers found that some populations responded positively to warming, whereas others responded negatively, depending on ecoregion and taxonomic families as well as life history and exploitation history. While the greatest losses in fisheries productivity were observed in the Sea of Japan, North Sea, Iberian Coastal, Kuroshio Current and Celtic-Biscay Shelf ecoregions, the greatest gains occurred in the Labrador-Newfoundland region, Baltic Sea, Indian Ocean and Northeastern United States. However, altogether, the losses outweighed the gains. The maximum sustainable yield of the evaluated populations decreased by 4.1% from 1930 to 2010, with five ecoregions experiencing losses of 15 to 35%. Chris Free, lead author of the study, said: “We were surprised how strongly fish populations around the world have already been affected by warming, and that, among the populations we studied, the climate ‘losers’ outweigh the climate ‘winners.'” 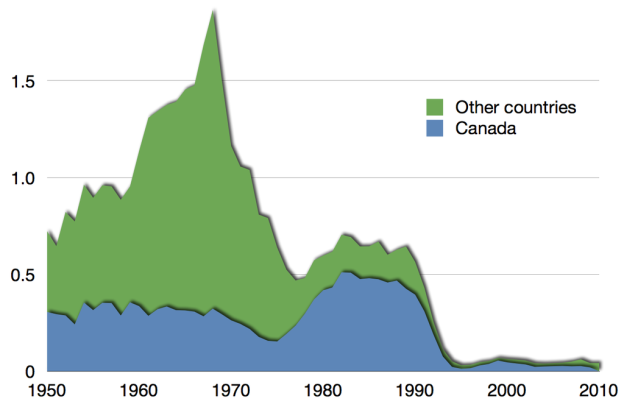 Time series for the collapse of the Atlantic northwest cod. Credit: Epipelagic, via Wikimedia Commons.

Notably, results from several combined studies indicate that the oceans are warming about 40 percent faster on average than previously reported by the United Nations Intergovernmental Panel on Climate Change. Up to 90 percent of the warming caused by human carbon emissions is absorbed globally by the oceans. Malin Pinsky, a researcher at Rutgers University and coauthor on the Free et al. Science article, told The New York Times. “If the ocean wasn’t absorbing as much heat, the surface of the land would heat up much faster than it is right now. In fact, the ocean is saving us from massive warming right now.” However, at the same time, the raising water temperatures are eroding marine life and fisheries.

Free said: “We recommend that fisheries managers eliminate overfishing, rebuild fisheries and account for climate change in fisheries management decisions. Policymakers can prepare for regional disparities in fish catches by establishing trade agreements and partnerships to share seafood between winning and losing regions.”