The 23rd conference of the United Nations Framework Convention on Climate Change was in full swing recently (6–17 November 2017). There, the countries that signed the 2015 Paris agreement discussed steps to keep the threat of climate change under control and—according to the Paris Agreement’s central aim—hold the rise in global temperatures to “well below” 2 degrees Celsius (3.6 degrees Fahrenheit) above pre-industrial levels by curbing industrial emissions of carbon dioxide. At the same time, scientists involved in the Global Carbon Project reported that total carbon dioxide emissions held stable from 2014 to 2016, at about 36 billion tons per year. They went on to clarify that this was a temporary hiatus that will end in 2017, and that economic projections suggest the likelihood of further emissions growth in 2018.

It should come as no surprise that “carbon-sucking” technologies, which capture and store carbon emissions from the atmosphere delivering “negative emissions,” have a promising role to play. According to climate change scientists, large-scale projects to suck carbon dioxide out of the atmosphere will be needed by the 2030s to curb temperature increases; solely reducing emissions will not be sufficient. There are many carbon-sucking projects currently underway or being planned, despite a 2015 National Academies of Sciences, Engineering, and Medicine report stating that climate intervention technologies like air capture were not a substitute for reducing emissions. 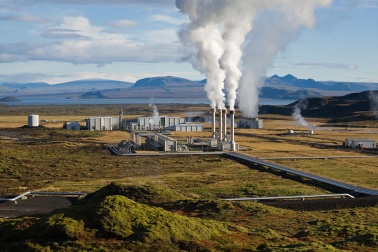 Climeworks has also teamed up with researchers from the Icelandic project CarbFix by providing its carbon dioxide filter technology to a geothermal power plant in Iceland. Last year, the CarbFix researchers showed that captured carbon dioxide injected into the ground turns into carbonate minerals—in other words, it turns into stone—in less than two years. This phenomenon occurs in Iceland because of the local geological characteristics. In general, carbon dioxide physically removed from the atmosphere can be injected into sedimentary rocks, trapped underground, and stored for centuries. However, Iceland is a volcanic island made mostly of basalt, a rock rich in elements such as calcium, magnesium, and iron that are required for carbon mineralization. Carbon dioxide reacts relatively quickly with basalt to create carbonate minerals. These minerals do not leak out of the ground, thus ensuring permanent and environmentally friendly storage of carbon dioxide emissions. In addition, basalt is one of the most common types of rock on the planet, so it provides a large carbon dioxide storage capacity. The Climeworks/CarbFix collaboration was the first system to directly capture carbon dioxide and safely store it to achieve negative emissions. There are two additional start-up companies that are paving the way for capturing carbon dioxide and making it ready for storage or use, as shown by their pilot plants. Canada’s Carbon Engineering is building technologies that aim to synthesize carbon dioxide into a clean fuel to replace crude oils. The United State’s Global Thermostat uses a low-cost heating process to remove carbon dioxide from ambient air and repurposes it in multiple industrial processes.

Despite the promising successes, carbon capture remains a controversial technology. Last year, in an editorial published in the journal Science, Kevin Anderson and Glen Peters stated that: “Negative-emission technologies are not an insurance policy, but rather an unjust and high-stake gamble.” They point out that these technologies could very reasonably be the subject of research, development, and potential deployment, but it should be assumed that they will not work at scale.

Why this opposition to technologies that are proving themselves in pilot plants and, with appropriate support, could develop into efficient means to curb climate change? The general concern is that they distract scientists, policy-makers, and the public from the pressing need to reduce carbon emissions as compared to capturing them. Others disagree. Klaus Lackner, director of the Center for Negative Carbon Emissions at Arizona State University, told Bobby Magill from Climate Central: “I’m arguing that we absolutely need air capture and all these negative emissions technologies, because there’s no practical way that we will succeed in closing the carbon budget in the available time. I’m arguing that we have dawdled for 40 years on this problem and pushed ourselves into a position where we really don’t have an option to get out.”

As stated in a recent article published in The Economist: “Stopping the flow of carbon dioxide into the atmosphere is not enough. It has to be sucked out, too.”