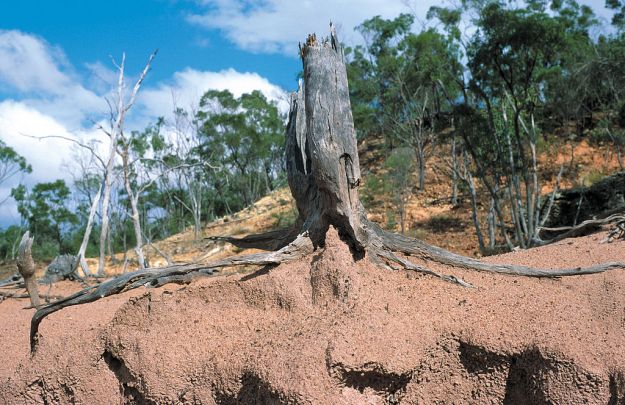 We face a steady, sobering news stream about the deforestation of the humid tropics, the warming of the Arctic, and more recently, the greening of Antarctica.  In contrast, we hear very little about drylands, the arid regions that cover more than 40% of Earth’s land surface.  Although the United Nations has periodically focused on drylands, the popular and scientific media have given little coverage to them, partly because of the absence of a focused international program.  However, in the past few years, we have been hearing more about drylands, including the recent unveiling of what has been touted as a secret—they are home to large forests, much larger than previously thought.

Drylands, which include habitats such as deserts, shrublands, and savannas, are found in most climatic zones but are prevalent in Africa and Asia.  They support both rural and urban communities, including cities like Cairo and New Delhi, and have been shaped for thousands of years by a complex combination of low precipitation, droughts, heat waves, and human activities such as the use of fire, livestock grazing, collection of wood and other forest products, and soil cultivation, often causing land degradation and desertification.  Not surprisingly, in 2005, the Millennium Ecosystem Assessment described drylands as “highly prone to desertification on account of their limited primary productivity and generally slow recovery following human disturbance.”  In the past decade, however, emphasis has been shifting from negative images of desertification to improved interactions between human activities and natural world processes.

Now, the negative images have been further softened thanks to the concerted efforts of researchers from 15 different institutions—and Google Earth.  The researchers have shown that drylands include large regions covered by hidden forests.  Why hidden?  Because, until recently, low-resolution satellite images did not allow a clear estimate of just how large these forests are.

By using a new set of ultra high-resolution Google Earth images, the researchers estimated that drylands contain forested areas that are similar in size to the Earth’s tropical rainforests when added together.  In the high-resolution images, each pixel represents an area less than a meter wide, as compared to tens of meters in previous images.  The new estimate, published recently in the journal Science, is 40 to 47% higher than previous estimates, corresponding to 467 million hectares of forest that have never been reported before.  The world’s dryland forests are concentrated to the south of the Sahara desert, around the Mediterranean Sea, in southern Africa, central India, coastal Australia, western South America, northeast Brazil, northern Colombia and Venezuela, as well as in the northern belt of boreal forests in Canada and Russia.

These findings are important for the evaluation of the terrestrial carbon sink or, in other words, of how much carbon dioxide is adsorbed from the atmosphere, in this case by trees.  By adsorbing carbon dioxide—the major heat-trapping gas—the dryland forests may contribute to the modulation of global warming.  Results from a 2010 study show that the dryland Yatir forest in Israel takes up carbon at rates similar to those of pine forests in continental Europe.  The area corresponding to the forest was cleared more than 3000 years ago by early settlers, resulting in alterations of the local climate.  Then, in 1964, the Jewish National Fund planted the modern-day Yatir Forest, resulting again in local climate change.

However, the hidden forests were not such a well-kept secret, after all.  The greening of drylands has been observed for a few years, and a study published in 2016 indicates that such greening is largely caused by increasing carbon dioxide atmospheric levels.  Lixin Wang, one of the study’s author, said: “We know from satellite observations that vegetation is greener than it was in the past. We now understand why that’s occurring, but we don’t necessarily know if that’s a good thing or not.” Wang continued, saying that greening could be caused by, say, invasive plants replacing indigenous ones, or bushes encroaching on grasslands for grazing cattle.

Good thing or not, the recent high-resolution Google Earth images do show that the increasing dryland green is greener than expected.  However, there remains the possibility that some of the forests could not be seen earlier because they were simply not there.  In other words, could some of the newly observed forests be recent growth resulting from the general dryland greening?

Going back to the evaluation of the terrestrial carbon sink, the discovery of the larger than expected forest extent will provide a climate policy boost by dramatically improving the accuracy of models used to evaluate how much carbon is stored in Earth’s landscapes.  In final analysis, the discovery “will help calculate the carbon budgets by which countries can measure their progress towards the targets set out in the Kyoto Protocol and its successor, the Paris Agreement.”

Disclaimer—The views expressed on this website are those of the authors and do not represent those of the Society of Environmental Toxicology and Chemistry. Full disclaimer here.