Peak oil, or peak water? Peak water might be the (unfortunate) answer. Alternative sources of energy may become more widely available, but there are no alternatives to water. The ongoing depletion of groundwater contained in aquifers—one of the most important sources of water on our planet—is a significant threat to our future. Many countries are already near or beyond peak water, and results from recent studies show that significant segments of Earth’s population are consuming groundwater all too quickly, without knowing when it might run out. 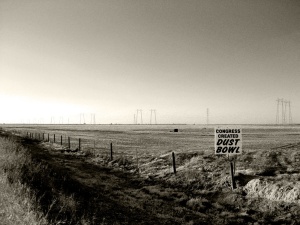 Even in the United States, many areas are already experiencing groundwater depletion—mostly caused by sustained overpumping. Increased demands on groundwater resources have overstressed aquifers all around the nation, not just in arid regions. The vast Central Valley aquifer system that underlies California’s heartland, has been named one of the most stressed worldwide. It is heavily utilized for agriculture, and the overpumping keeps escalating due to the record-breaking drought, which is exacerbated by record hot conditions. The disturbing experts’ viewpoint is that California’s farmers “are eroding their buffer against future droughts and hastening the day when they will be forced to let more than a million acres of cropland turn to dust because they have exhausted their supplies of readily available groundwater.” There is no doubt that water is the new gold.

However, we are not only pumping too much, we are also putting this scarce resource at risk to compromise the remaining groundwater by polluting it with toxic chemicals, most notably through fracking. 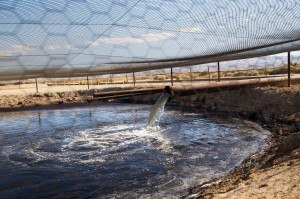 Fracking fluid and other drilling wastes are dumped into an unlined pit located right up against the Petroleum Highway in Kern County, California. Credit: Faces of Fracking, CC BY-NC-ND 2.0.

Fracking, or hydraulic fracturing, is the process of extracting oil or natural gas by injecting wells with fracking fluids, which contain water, sand, and toxic chemicals, at extremely high pressure. Fracking a single well requires between two and five million gallons of local freshwater, and generates enormous amounts of contaminated wastewater. The wastewater is kept in lined pools above ground or is injected deeper into the earth using waste-injection wells. As expected, there have been highly controversial incidents of reported groundwater contamination.

Last summer, California state officials suddenly shut down several waste-injection wells in Kern County. According to state documents obtained by the Center for Biological Diversity, almost three billion gallons (the equivalent of 454 Olympic swimming pools) of oil industry wastewater containing fracking fluids and other pollutants were dumped into Central Valley aquifers—legally protected under the federal Safe Drinking Water Act—through at least nine injection disposal wells. The Central Valley Water Board tested eight water supply wells out of more than 100 in the vicinity of the disposal injection wells. In half the water samples, arsenic, nitrates, and thallium exceeded the maximum contaminant level.

The state of California was delegated primary responsibility for implementing the Class II oil and gas underground injection control program of the federal Safe Drinking Water Act in 1983. Thus, dumping wastewater into Central Valley aquifers has been called an illegal activity by the Center for Biological Diversity. However, a few months ago, SFGate reported that companies were allowed by the state to drill these wells into aquifers suitable for drinking or irrigation: “The problem developed over decades, starting with a bureaucratic snafu between state and federal regulators. It was made worse by shoddy record keeping and, critics say, plain negligence.”

What’s the industry point of view on groundwater contamination? Rock Zierman, chief executive officer of the California Independent Petroleum Association, which represents smaller oil companies in the state, told SFGate: “If we’re not able to put the water back, there’s no other viable thing to do with it. If you were to shut down hundreds of injection wells, obviously that’s a lot of jobs, a lot of tax revenue.” Does that mean it’s OK to contaminate groundwater and accept consequences such as a dwindling drinking water supply, irrigation of crops with polluted water, and barren croplands?

In 2014, the U.S. Environmental Protection Agency (EPA) directed the state of California to submit a Revision Plan for the underground injection control program. The state submitted its Program Revision Plan on February 6, 2015 and is now required to meet a February 15, 2017 compliance deadline under heightened EPA oversight. But how frequent is groundwater contamination caused by fracking around the country? It’s hard to know, because researchers are unable to investigate many of the suspected contamination cases. Why? Settlement details are sealed from the public when energy companies settle lawsuits with landowners.

Eric Wohlschlegel, a spokesman for the American Petroleum Institute, in an interview released to the New York Times in August 2011, dismissed the assertion that sealed settlements have hidden problems with gas drilling. He added that countless academic, federal, and state investigators conducted extensive research on groundwater contamination issues and found that drinking water contamination from fracking is highly improbable. However, a 1987 report had already highlighted a case of groundwater contamination in West Virginia. And, in December 2011, the EPA released a report indicating that contaminants included in fracking fluids polluted central Wyoming underground water, likely as a result of the gas-drilling process. The report was expected to be a turning point in the heated debate on the contribution of fracking to contaminating groundwater, but it was touted as inconclusive and lost ground.

Now the debate can count on new undeniable findings. Contamination caused by Marcellus Shale gas production has been reported for Pennsylvania groundwater. Results from a recent peer-reviewed study demonstrate that natural gas and other contaminants migrated laterally through kilometers of rock at shallow to intermediate depths, impacting an aquifer used as a potable water source. The study’s authors concluded that data from similar incidents should be released publicly in order to avoid similar problems through use of better management practices.

There are reasons to hope for a reversal in oil and gas industry denial of groundwater contamination and its related environmental and public health effects. Long-awaited re­ports are providing momentum to fuel the already hot debate on groundwater pollution caused by fracking. 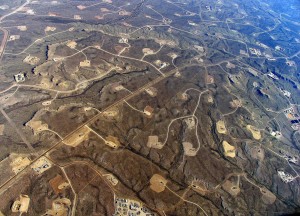 A detailed examination of the chemical pollution impacts of fracking, commissioned by CHEM Trust and released on June 21, 2015, states that “Fracking has the potential to have a massive impact on the countryside and those who live in it – be it people, livestock or wildlife. The potential scale of fracking operations is huge, creating major water pollution risks from the large amount of chemicals used, and wastewater generated.”

Finally, on July 9, 2015, the California Council on Science and Technology released its long-awaited final assessment of fracking in California. It highlighted the use of highly tox­ic chem­ic­als, which are mostly uncharacterized in terms of potential ef­fects on groundwater, wild­life, and crops. The report concluded that these effects remain “uninvestigated, unmeasured, and unknown. Basic information about how these chemicals would move through the environment does not exist.” In the other words, the report’s major findings seem to be that we are clueless about the potential effects of fracking on the environment. The report also points out that over half of the wastewater is disposed of in pits that allow water to percolate into the ground, where it could easily contaminate groundwater. 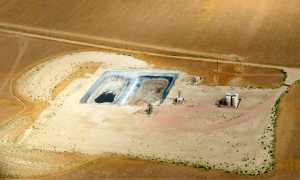 Gas drilling well pad and ponds. Credit: Beyond Coal and Gas, CC BY 2.0.

Jane Long, the report’s co-lead, told the Los Angeles Times that researchers did not find strong evidence of fracking fluids in irrigation water. However, she added: “What we did find was that there was not any control in place to prevent it from happening.” Senator Fran Pavley pointed out in a press release that fracking, as well as all oil and gas drilling and waste-disposal activities, should be done transparently. “Government agencies, the public in general, and residents living near well sites need to know in detail about the presence of dangerous chemicals mixed in water used in fracking and then pumped to the surface as byproducts,” she said, adding that she will make every effort to pass legislation that takes into account recommendations from the report, including the phasing out of about 900 percolation ponds that threaten to taint groundwater.

On December 17, 2014, Governor Andrew M. Cuomo’s administration announced that it would ban hydraulic fracturing in New York State. On June 1, 2015, Maryland’s ban on hydraulic fracturing became law—in stark contrast with the law signed by Texas Governor Greg Abbott on May 18 that precludes cities and towns from passing ordinances that prohibit fracking and regulate underground activity. This measure effectively banned fracking bans, like the one passed by the city of Denton, Texas, last November. If history is any indication, the fracking debate will go on, fiercely and untamed, for years to come, and will involve scientists, regulators, residents, environmentalists, and—of course—the oil and gas industry.

In 2010, Rex W. Tillerson, the chief executive of ExxonMobil, said at a Congressional hearing on drilling: “There have been over a million wells hydraulically fractured in the history of the industry, and there is not one, not one, reported case of a freshwater aquifer having ever been contaminated from hydraulic fracturing. Not one.” As this statement has now been demonstrated to not be true, let’s prioritize protecting our groundwater and stop polluting it.

10 thoughts on “Fracking and Groundwater Contamination: The Known and the Unknowns”